Focusing on emerging practices with professional, but not necessarily national, connections to the country, British Built is the sequel to the ubiquitous SuperDutch. – the book that was, at some point, on everyone’s desk when you were in college. Um… that is…if you were recently in college, I mean. British Built lives up to its popular predecessor.
The architects represented in the book are largely responsible for Britain’s multicultural identity – a microcosmic representation of the degradation of both physical and virtual borders in Europe. The young offices represented are multi-scalar, multi-tasking, and multi-national. In her introduction – one of a few excellent essays on the past, present, and future of British design – Lucy Bullivant recounts the shifts in social climate and government initiatives that have encouraged new development and nurtured what could be considered some of the most innovative architecture in the world.

‘non-style’ is so important to many of the featured architects and their peers: a style implies repetition, not a fresh, bespoke response to a situation or cultural context. In formal terms, these architects reject universal recipes in favor of ingenious custom-designed solutions that are no bombastic or self referential. For them, a building needs to work holistically as an urban space, contributing to the construction of the city and its sense of civitas, by offering a generosity of character.

Architecture has become as fluid as the social patterns it is entrusted to accommodate, wit its meanings easily appropriated or debased to make a fashion or marketing statement.

The predetermined, self’referential sculptural presence of building is no longer the primary means by which architecture is made to communicate; that approach has been transcended by the marriage of process, socio-spatial concerns and adaptation to new information and uses.

As you can tell from the excerpts, these architects aren’t afraid to break with (dying?) trend of iconic, signature, overly styled buildings. Two firms who really stand out from the talented crowd of British Built, are FAT (Fashion Architecture Taste) and the painterly/poetic David Adjaye (whose Houses is another gorgeous book).
FAT are true post- modernists (although not quite Postmodernists). Their aim has been to “bandish the self-referential abstractions of modernism and to counter their failure to engage in a cultre outside architecture.” They’re everything I think a young architecture firm should be today: diverse and risk-taking with a broad understanding of what Architecture can be, how it can be understood, and perhaps most important, they don’t take it too damn seriously! More architects need to have a sense of humor! It won’t take away from your work, I swear. Loosen up a little bit. 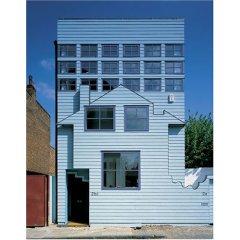 Go to FAT’s website, check out their work and while your at it, learn step-by-step how to become a famous architect: [ex. step: “Now its time to develop your mystique. This is all important, because it is what you are selling. Remember, you won’t have to design a building for at least ten years. And in this time you will live off your mystique, so make it good. Mystique is what you say, and the way that you say it. If you come from continental Europe, great. If you don’t, pretend that you do. Mystique should also suggest revolutionary politics and french philosophy.”]

The Commentary on some of the represented firms can sometimes be a bit of a tease; sometimes I wish there was more focus on the projects and less on the firm. Regardless though, there’s enough to get you excited about what these firms are doing; enough to encourage further reading and research. always a good quality in a book.

Does anyone know who’s the guy on the book-cover (the architect of the dome with dots)? Thanks