It’s a case of life imitating art as Death Stars sprout around the globe and the inevitable struggle between competing Galactic Empires will surely annihilate the planet. Rem Koolhaas strikes first with a new scheme for Dubai. It’s like Manhattan…but way more futuristic and in the desert:

The 44-story sphere is actually a “a self-contained three-dimensional urban neighborhood” containing smaller spheres joined together by a series of tubes. As is their nature, OMA seem to be establishing a new intra-office archetype (quick, call the patent office!), as this scheme is not entirely dissimilar from the one they visited with the RAK Convention and Exhibition Centre…

The RAK is a scheme so original, it’s actually Original – as in primoridal. In the architect’s words:

“the sphere and the bar explicitly abandon claims to formal invention or ‘originality’. (The sphere even existed before man itself…) Yet both geometries still continue to feed the architectural imagination: perfectly autonomous shapes, within their bounds the promise of a perfect world.”

Moving on, it’s time to forget about 5-star hotels, because Heerim Architects have designed what appears to be a Death Star Hotel in Baku, Azerbaijain:

The rendering is a bit misleading though, as this isn’t a sphere at all. It’s more of a disk – a Death Palette if you will. Way less terrifying, and way less likely to engineer a complete takeover of the universe. And just for good measure, let’s include the original piece of interstellar architecture that inspired these bold new designs: 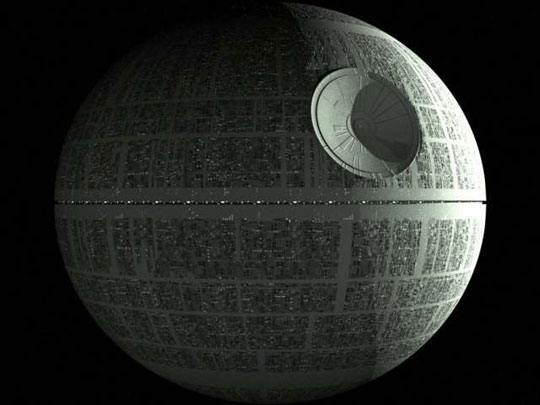 Oh, and just so this post isn’t ENTIRELY without academic reference, consider this sentence the obligatory Boullee reference:

6 replies on “Death Star Architecture Around the Globe”

I completely agree. WTF is up with this death star craze? Where is it even coming from?

Will Jedi training be provided?

Impressive. It could be nice to be there to take some pictures… But it seems too fake.

this is a really beautiful sphere competition entry

[…] says Reinier de Graaf, of OMA. So what does that say about the OMA-designed Death Star? Does it […]