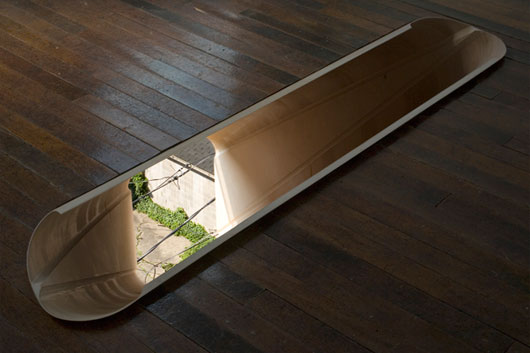 Sarah Oppenheimer’s 610-3356 is an aperture through a gallery space; essentially a hole in architecture. A finely crafted tunnel that travels from the 4th floor of Pittsburgh’s Mattress Factory art museum, down into the gallery below and out a window. The project transforms our understanding of not just the gallery, but also the space of a building as well as its relationship to the immediately surrounding context. One’s gaze transitions from the wall (a natural instinct when stepping into a gallery), down to the floor, and then out, perplexing, into a neighboring yard. An impossible view that must surely—at least for a moment—disorient and disrupt one’s understanding of the building. I imagine it’s like suddenly being stricken with x-ray vision and not quite understanding exactly how to use it. Modern Art Notes has a first-hand account of the installation:

The privilege of looking at what you want for as long as you want is such a basic part of museum-going that none of us think much about it.

But as soon as I discovered that Sarah Oppenheimer’s 610-3356 went through a Mattress Factory floor, I realized how it dramatically changes the relationship between the viewer and an artwork, between the museum and the visitor, and even between the museum and it’s neighborhood. Here I was, standing in a museum gallery looking at an artwork, and the artwork didn’t just accept my gaze the way a painting or a sculpture might, but it re-directed it. Furthermore, it re-directed it outside the museum, into the backyard of a museum neighbor. Oppenheimer had transformed the private, privileged museum-goer’s gaze into an intrusion, a violation of someone else’s space.

And a view from the third floor gallery: 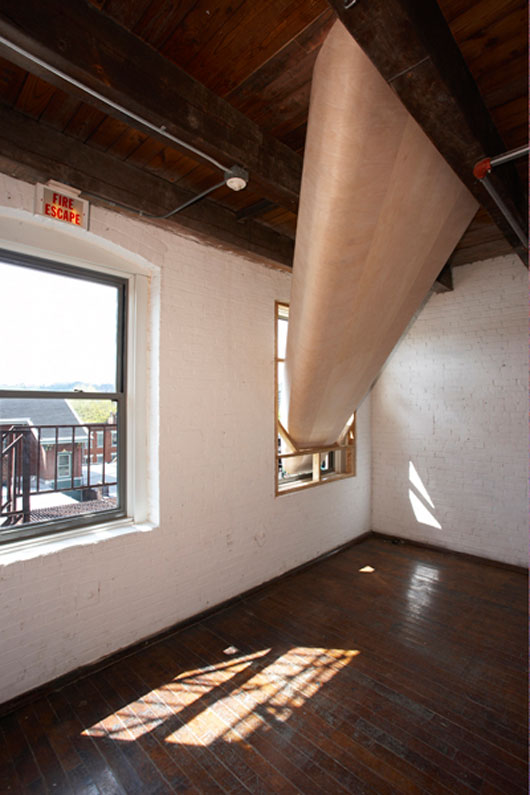 Even more impressive than a suprise view through a building? A surprise view THROUGH THE EARTH. Legend has it than an “eccentric Victorian engineer” created what he referred to as The Telectroscope, a “visual amplier” that allowed people to see through a tunnel stretching between London and New York City — from the old world to the new world, as it were. Sadly, as tends to happen with these things, the project was beset with various disasters and the engineer with mental illness. His vision was never complete. 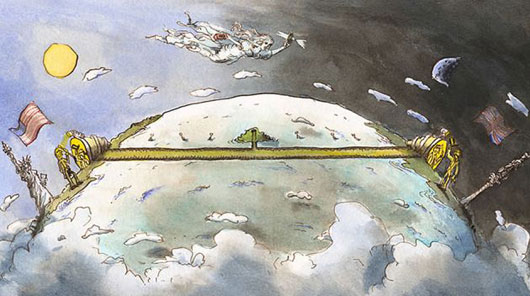 Cue artist Paul St. George, descendent of the Telectroscope’s inventor. Upon finding his great-grandfather’s notebooks, Mr. St. Geroge completes both the tunnel and the optical device; finishing the intercontinental installation just in time for the 125th anniversary of the Brooklyn Bridge. 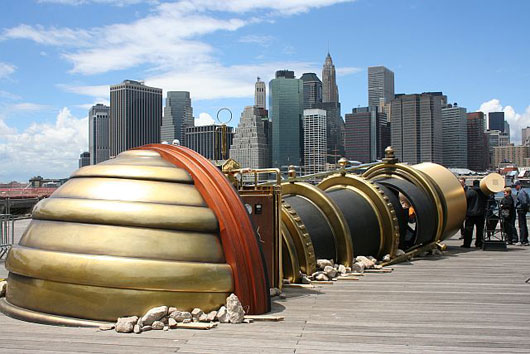 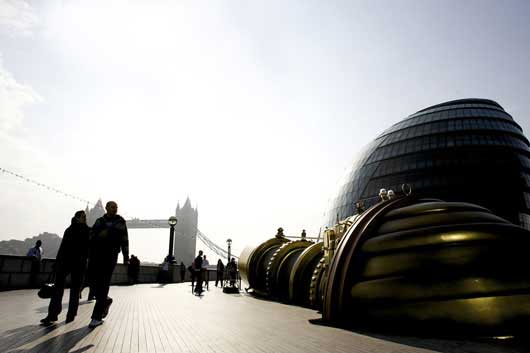 The resulting installation is like something from a Jules Verne novel, or Alan Moore’s fantastic serialized graphic novel, The League of Extraordinary Gentlemen. A steampunk civic webcam joining two of the world’s greatest cities and, for only a brief time, reducing the distance between them. The unlikely visual-communication device compresses the World’s stage, creating entirely new opportunities for us to enact our social theatre. Business meetings? Marriage proposals? Want to show-off that new baby to your family in New York? The organization behind the Telectroscope, Artichoke, invites visitors to schedule appoints to coordinate visits internationally. As long as you don’t mind a few dozen people watching. 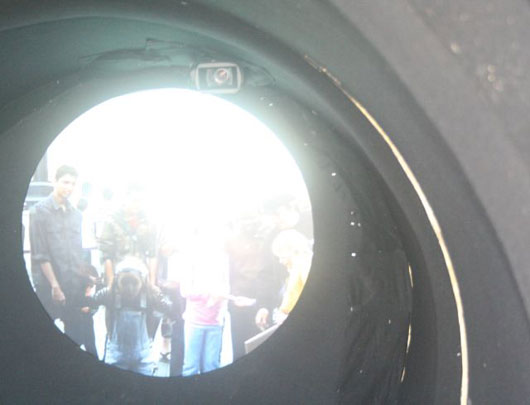 One a literal tunnel and one a literary tunnel, The Telectroscope may not be as subtly disruptive as 610-3556, but both projects compress space and merge contexts—whether it be two adjacent lots or two transatlantic cities—and force us to confront both the nature of private vs public space and our relationship to the barriers that separate the two.

I am astonished to see your deferent views.Its really great.