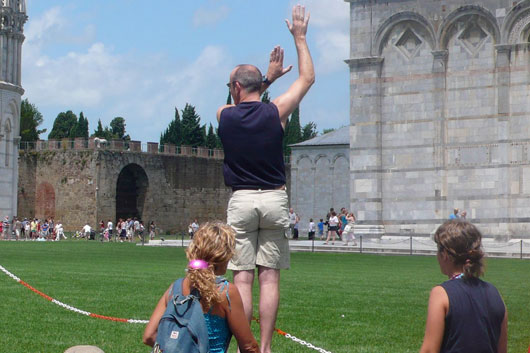 While in Italy last week, we made a quick side trip to Pisa. What was surely once a nice little town has since been descended upon by thousands of tourists (to be expected, of course) and—even worse—hordes of incredibly pushy souvenir vendors hawking everything from leaning mugs to wind-up toy cars (I still don’t understand that one). All this brought about by one simple bell tower. Despite the vast selection of tilted dishware, the most popular Pisa souvenir seems to be a simple photograph. That’s right, it’s the ubiquitous photo-album-favorite which I’m dubbing, Isn’t this crazy? I’m holding up the Leaning Tower! Ha! 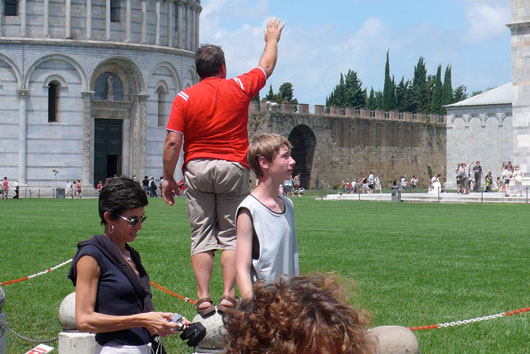 Who could have guessed that that the process of shooting these photos would create a spectacle almost as compelling as the tower itself. People were literally waiting in small lines to stand on a bollard or a particular piece of pavement in order to recreate the pop-photograph from just the right angle. They’ve traveled the world over just to get this one architectural portrait — a portrait that’s surely helped increase tourism to Pisa:

“Wanna take a day trip to see the Leaning Tower?”
“ummm….sort of. But I really want to have my picture taken with it!”
“Haha! yeah! You mean the Isn’t this crazy? I’m holding up the Leaning Tower! Ha! photo?”
“That’s the one, friend!”

I don’t mean to sound cynical here. I actually love the fact that we can go gaga over a 13th century campanile. In fact, maybe contemporary architecture should embrace tourist photo-interaction as a design strategy. Why just take your picture in front of a new museum, when you could wear it as a crazy hat or hold it above your head like an Olympic powerlifter? The possibilities are endless really, but it would take a bold innovator and comprehensive design strategy to innovate such a plan. Maybe someone can start a whole new village in China. A depth of field architectural playground where vendors hawk instant digital printouts instead of cheap ceramics. 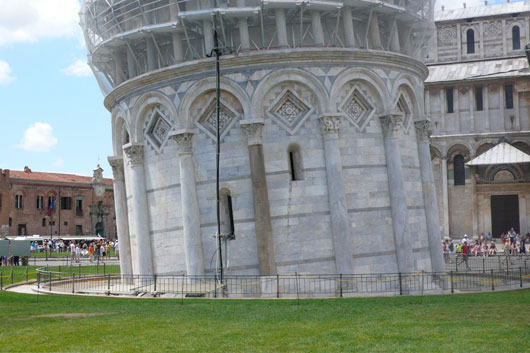 &#183 To Italy and Back Again [Life Without Buildings]