As the human race dares to venture further out into space, we’re going to have to adapt our construction methods for large-scale space travel — think starships, space docks, habitable satellites, and other mega-objects too insanely large for construction on this gravity-well we call Earth. In a thought-provoking article, scifi blog io9 takes a look at the far future of construction, because as it tends to do, science fiction will probably inspire many of the eventual designs of real-life galactic monoliths. Among the hundreds of possible examples from the annals of the genre, two of the megastructure construction facilities that I find most compelling are the planet-building factory in the Hitchhiker’s Guide to the Galaxy (pictured above) and Star Trek’s Federation shipyards (we’ll avoid the hotly-contested debate surrounding the construction location of the original U.S.S. Enterprise). While the full-scale construction of entire planets is nothing less than awe-inspiring, it’s also of a scale that’s kind of…difficult to comprehend. Off-planet shipyards, however, are entirely within the realm of reason…relatively speaking, of course. And with spaceship construction yards, come spaceship breaking yards. 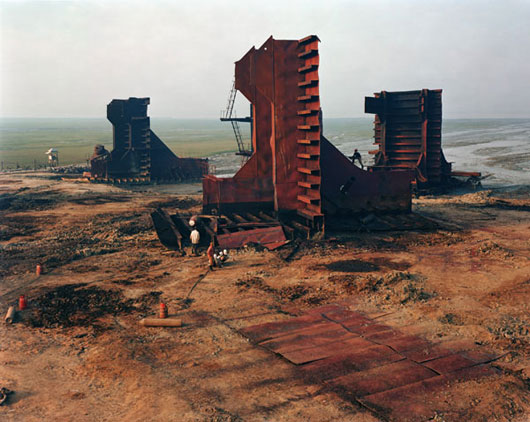 As with our current freighters and battleships, spaceships will have to be destroyed after decommission. This reminded me of a terrific BLDGBLOG post from 2005, Where Cathedrals Go To Die, ostensibly about shipbreaking yards. As photographed by Edward Burtynsky, miles of Indian shoreline become sublime graveyards, scattered with the rusted and decaying remains of once-seaworthy vessels. They become places where scores of workers slave day and night to slowly tear down barges and freights of monstrous scale. Science fiction tells us that eventual space programs will draw heavily from maritime hierarchies and terminology, so when starships roam the skies, will there be an equivalent to the shipbreaking yards? Will there be zero-gravity breakyards around junk planets? Or will pieces of currently unimaginable technology drift freely through the solar system with the other 600,000 pieces of space junk currently floating above us? 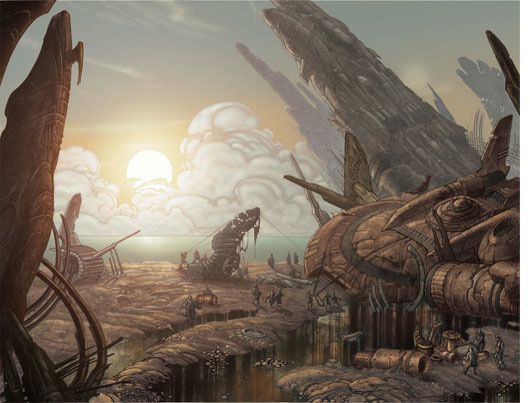 In the most recent issue of Astonishing X-Men, writer Warren Ellis proposes one possible solution: a terrestrial shipyard for decommissioned spacecraft. With images that look like they owe a debt Burtynsky’s photographs, artist Simone Bianchi imagines a beach in India scattered with the remains of rusted and decaying spaceships, slowly being torn down by scores of workmen. But how did these ships end up here? Is this a crash site or just the comic-book equivalent of standard shipbreaking, an already sysiphean task?

Which brings me to a third and final rambling point. I’ve always wanted to see a sequel to the 1996 film, Independence Day. At the end of that movie, enormous alien ships of a scale unlike anything on Earth crash all over the planet. So then what happens? Where do we go from there? What happens on and around these crash sites as scientists and the military race to unlock the secrets of an extraterrestrial civilization? What new technological advances would come from reverse engineering alien technology? In Independence Day 2, ersatz cities and favellas would surely spring up around these enormous new mountain-sized monuments and new religious cults might claim the ground as sacred. Invasion movies are great, but there’s so much material to be explored in post-invasion movies.

Unfortunately, for now we have only movies, television, and books to feed our space-travel imaginations and mind-blowing colossal construction. Our current reality is something a little more pedestrian, but Earth-scale engineering might not be so far off, and by 2019 we’ll have an inflatable moon igloo. At least that’s a start, right?

I’m intrigued by discussions of self-building / nanotech buildings in some science fiction novels. Check out Ken MacLeod’s Fall Revolution series if you haven’t before.

I haven’t read any Ken MacLeod but it sounds like it could be pretty good. Although not really related to construction, there is some pretty cool self-aware nano-graffiti that counters a nanotech building skin in William Gibson’s All Tomorrow’s Parties.

And thanks for the ass correction, it’s been noted.

I’ve just been informed that my idea for Independence Day 2 is basically the plot of Robotech. I inadvertently re-invented Robotech. I can’t decide if I should be excited or depressed.