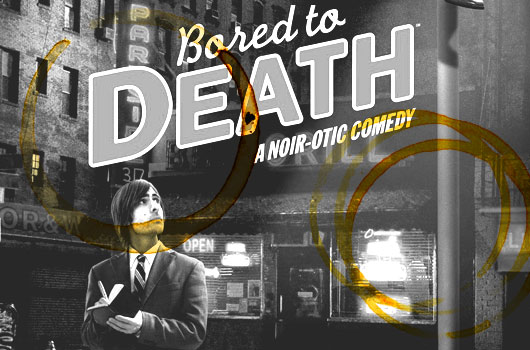 Do I dare
Disturb the universe?
In a minute there is time
For decisions and revisions which a minute will reverse.

For I have known them all already, known them all –
Have known the evenings, mornings, afternoons,
I have measured out my life with coffee spoons;
I know the voices dying with a dying fall
Beneath the music from a farther room.
So how should I presume?

– From T.S. Eliot’s “The Love Song of J. Alfred Prufrock”

It started Wednesday morning at a diner in Park Slope. In recovery from the night before, I was slumped over the diner counter, sipping the diner coffee and reading the New York Times on my iPhone when I came upon an article about the city’s new coffee culture. A plan began to emerge: there I was, drinking coffee, reading about coffee and needing more coffee with nothing more important to do than buy a bottle of wine for dinner that night – the perfect experiential synergy to create a feedback loop of illusory productivity. Or more simply, the makings of a Wednesday afternoon. My first instinct was to visit all the coffee shops listed in the NYTimes piece but I quickly realized that was way too ambitious (and way too much coffee) so I selected a few choice cafes scattered across Brooklyn. 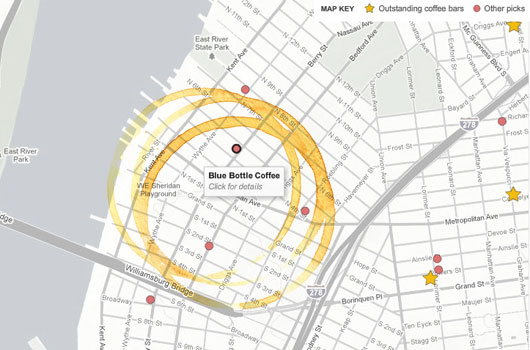 [A Brooklyn coffee primer courtesy of the New York Times]

Now I’m not exactly a stranger to New York, but I’ve never really lived there and despite repeat visits, there are still massive areas of Brooklyn that are, if not completely unknown to me, incredibly…well, let’s say “hazy.” My very own late night Mr. Hyde seems to travel around the borough as if by teleporter, leaving me with only sprained ankles and fuzzy recollections of red hair and blonde brick. But who needs recollection or any sense of direction when the little gizmo on which I was reading the paper could also conveniently provide turn-by-turn directions pointing me to small cafes in foreign neighborhoods. Mobile devices like iPhones have blown open our cities. The technology in your pocket has everything you need to navigate and understand a strange place; to tame and domesticate an exotic locale. Forget about pouring over guidebooks or bugging a friend to show you around. There’s an app for that. 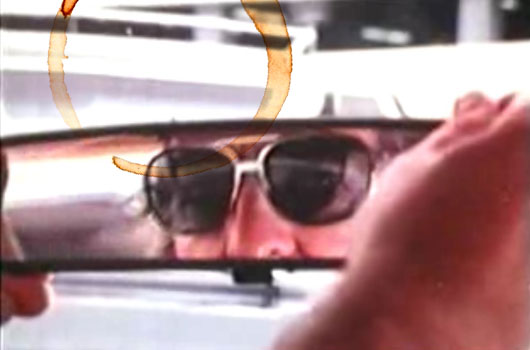 My constant reliance on the iPhone as an urban compass recalls British architecture critic Reyner Banham’s 1965 essay “The Great Gizmo.” For Banham, the American landscape was tamed by the gizmo. In fact, he argues that the use of the gizmo has become the defining characteristic of American progress and design culture. And the defining characteristic of the gizmo was its autonomy. “The great American gizmo,” writes Banham, “can get by without any infrastructure… it is independent of any physical or social infrastructure beyond that by which it may be ordered from catalogue and delivered to its prospective user.” The function of such gizmos was to bring instant order or human comfort into a wild situation. Portable domesticity. Instant urbanism. While there may no longer be an American frontier that needs taming. there are casual frontiers, everyday frontiers, personal frontiers – a foreign city or an unvisited neighborhood or even an elusive cafe. With the rise of the casual frontiersman (distinguished from the flâneur by his intent), the importance of the gizmo has changed. As I read reviews of coffee shops, then located and mapped my selected destinations — Cafe Pedlar, Marlow & Sons, Blue Bottle Coffee (An old San Francisco favorite now in New York) — it occurred to me that the American gizmo’s dependence on infrastructure, a quality that Banham believed to be its dangerous weakness, has actually become its greatest strength. As the frontier turns inward, becomes urban, we rely on our gizmos to connect with invisible infrastructures — locative data, telecommunication networks, reviews, news, images, information — to get us safely through the city.


[Everything you need to know about Bored to Death]

Without my gizmo, I would have never been able to find my way around Brooklyn so easily, much less track down a certain coffee shop. I’ll spare the details of describing the cups and clientele at each of the aforementioned locations and skip to the one that matters. Somewhere along the way, this mediated, gizmo-enhanced, semi-directionless Brooklyn coffee investigation brought to mind the recent HBO television series Bored to Death. After all, what are television shows if not cues or advertisements for modes of living? They tell us how to arrange our homes, what to say to our friends, what to drink, and, as in the case of Bored to Death, where one can find a good cup of coffee in Brooklyn and when it’s necessary to deal with writer’s block by starting your own unlicensed detective agency on craigslist. Unfortunately, the detective agency would have to wait but the coffee was fully within the realm of possibility – assuming it was a real place and not some studio backlot. Suddenly, I had a destination. This was no longer a mindless drift. My case: 1) track down the coffee shop in Bored to Death 2) order a coffee and a sandwich. 3) …that’s pretty much it really. As far as cases go, this one was open-and-shut. I should probably find a crime or something next time. Nonetheless, I owe its success to the modern gizmo. It didn’t take long to search through a few coffee and television blogs (infrastructure) to confirm that my destination was real and was in Brooklyn: Smooch [2]. Then it was only a matter of mapping the location (infrastructure), and finding the right train (infrastructure). then sending a photo (infrastructure) to a friend who also loves Bored to Death. Case closed.

[navigating foreign territories with the help of invisible infrastructures]

The classic private eye wasn’t so lucky. He couldn’t turn to craigslist or iPhones or social networks. From the sleuth’s magnifying glass to the gumshoe’s sidearm, the detective had only his guts and his gizmos to overcome the dangers of a city made strange by crime and intrigue. His necessity for autonomous gizmos isn’t so different from that of the frontiersman. The context has changed, but the goal is similar. It was no less a man than oft-referenced cultural critic Walter Benjamin who described the detective story as “the literature which concerned itself with the disquieting and threatening aspects of urban life.” The detective tamed this “threatening” landscape as a frontier that could be more dangerous than the actual wilderness. But as technology advances, the detective must adapt. Shaking down some snitch for information in a back alley is all well and good, but easy access to profiles, reports, photos and maps becomes just as crucial. As this information disperses across fiberoptic networks, the modern detective must master the modern gizmo. “The future, at a modest guess,” writes Banham, “is going to require a much more flexible distribution of American citizens on the ground, and this is going to be much easier to effect if they can pick up their culture and ride.” While Banham seems to envision a completely autonomous nomadic lifestyle similar to that which was partially realized by Ant Farm in the 70s, our notion of mobility has changed. The virtue of our new mobility is not movement through space, but access in space. With an active information infrastructure and the means to read it, specific space/time coordinates become irrelevant. In this new context, the basic premise of Banham’s prediction holds true for both the modern American citizen and the detective. Infrastructure has disseminated into the ether and with the gizmo, so too have we. We use our gizmos to work in cafes. We have conference calls in taxi cabs. We do research while waiting for a bus. We uncover hidden aspects of the city. We update our relationship status with tears still fresh in our eyes. We move confidently through unknown spaces guided by digital maps and blog hearsay in pursuit of elicit agendas. And sometimes we even wander through strange neighborhoods on Wednesday afternoons in search of perfectly roasted coffee. 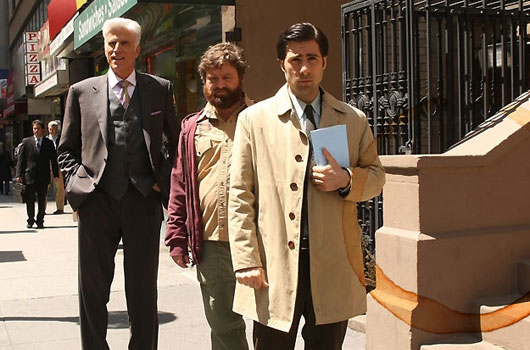 [1] 2 hardboiled eggs, sliced + 1/3 skinned and sliced cucumber + a lot of cracked pepper between 2 slices of lightly toasted pumpernickel bread. Simple, right?
[2] Ozzie’s in Park Slope was also featured in episode seven. If you’re interested in the show, you should definitely check out their website. There’s this convenient map that lists every location in Brooklyn where they filmed.

2 replies on “Over-caffeinated, Under-employed, and Bored to Death”

I suddenly feel the need for an iPhone, several cups of coffee, and a new TV. If I end up scraping together enough money to make this happen, you should get a cut of the proceeds. :) This was really enjoyable to read.