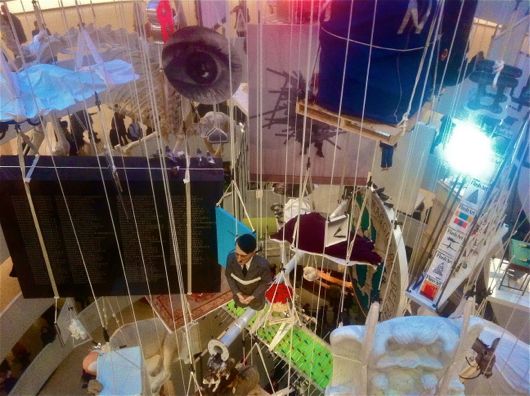 The Maurizio Cattelan exhibition ALL ended its run at the Guggenheim last weekend and I wanted to share some quick thoughts about the show, especially in light of what seems to have been a mostly negative reception from some of our more prominent art critics. But more than that, I’m also hoping that by posting what is little more than a few ill-informed observations jotted down in a notebook about an artist whose work I had never seen before stepping into Frank Lloyd Wright’s atrium late last year, I’ll instigate a bit of a sea change for Life Without Buildings. Basically, I want it to be more fun. After years of hard work and school, writing architectural history has actually become an honest-to-god, bill-paying job and now more than ever I need a place to experiment with different forms of criticism and documentation, to work out new projects, to make mistakes, and to write about things that are little less serious. This will be that place. So that’s happening.

But back to the Cattelan show. I loved it.

I kept thinking to myself, ‘this is the ultimate Postmodern exhibition.’ Naive? Probably. An exaggeration? Definitely. But I’ve had Postmodernism on the mind a lot lately, due in no small part to both the recent Reconsidering Postmodernism exhibition and the excellent Radical Postmodernism

issue of AD edited by FAT and Charles Jencks. All embodies those peculiar qualities that we have come to know and love and associate with Postmodernism. It was an autobiographic, end-of-career retrospective that was not only incredibly contextual (more on that in a second) but also de-familiarized the artists’s oeuvre –for those familiar with it, I suppose– by re-presenting and juxtaposing formerly independent, site-specific works. On paper, it looks like a terrible idea, and if the critics were to be believed, maybe it was. But it was also a hell of a lot of fun and something that anyone who walked in could enjoy.

For me, All read like an exploded novel whose pages kept rearranging themselves, revealing and concealing and re-revealing plot threads until some semblance of a narrative –or narratives— seemed to emerge as I slowly spiraled down the ramp of the Guggenheim. Cattelan’s world proved to be one where where scale is mutable and hearts are on felt sleeves and the uninitiated viewer is left to make sense of the artist’s entire life. As Robert Rauschenberg famously erased a drawing by de Kooning, Cattelan seems to tackle similar issues by hanging (twice!) what appeared to be effigies and invocations of Joseph Beuys. Perhaps that’s not entirely fair because everything was hanging – suspended from the ceiling of the Guggenheim, cluttering the museum’s atrium while the walls remained bare. By no means was this the first show to build in the atrium space, but it was surely one of the best I’ve seen (excluding those that involved climactic cinematic shootouts). It was also the first exhibition I’ve seen with an accompanying iPad app, though I’m sure that will soon become de rigueur if it’s not already. 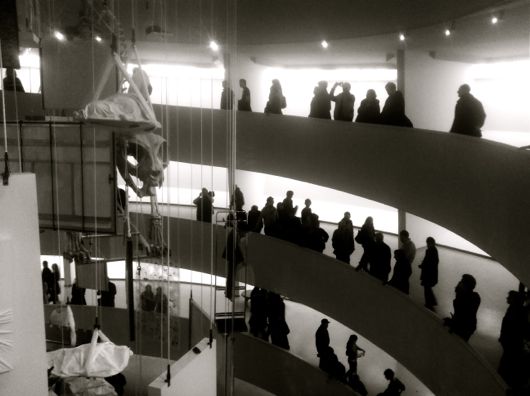 It was a stunning use of the space. The museum turned inward and I caught myself looking at the other visitors as much as at the work and falling in love no fewer than six times and eavesdropping on conversations that went something like this: “that’s so weird! you’re looking at the same thing but it looks different!” EXACTLY. That simple comment prompted me to tweet the following:

If the Guggenheim did not exist it would be necessary to invent it. twitter.com/LifeSansBldgs/…

Again, this is perhaps a slight overreaction, but I’ll be damned if I didn’t mean every word of it.