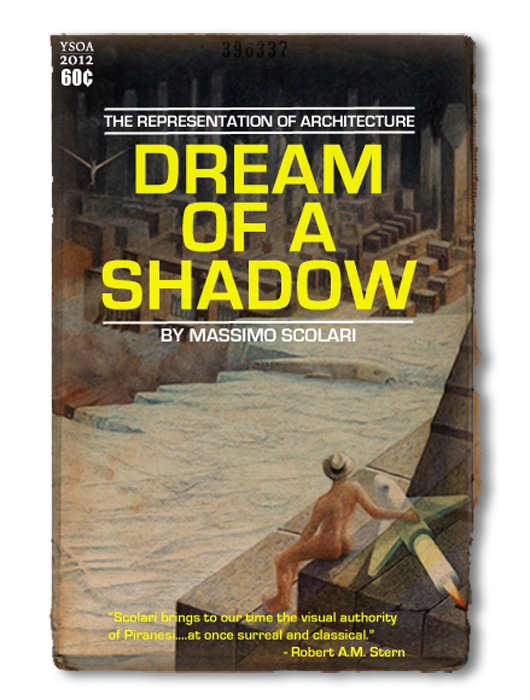 [“Massimo Scolari, Dream of a Shadow, The Man (2011), reimagined as a vintage science fiction book cover because that’s exactly what it looks like.”]

Italo Calvino did not necessarily listen to everything Massimo Scolari said when he spoke to him about architecture, but the attention of the Italian writer was captured when he learned that the young man was also a painter. In the lives of writers there is always a moment when, confronted by a reader, conflicting imaginaries must be reconciled. The writer is called upon to explain or defend what is, to him, intuitive and personal. But when Calvino met young Scolari on that fateful New Year’s Eve, he was met with a strange request: to depict the Invisible Cities. The obvious problem, which the writer was quick to point out as he politely rejected the painter’s inquiry: The cities were invisible. They existed only within the mind. Yet in Scolari’s pleas, Calvino was able to discern an urgent need that could only be met through a narration of walls and towers destined to crumble and the writer promised to send him descriptions of visible cities, intended to be given form and color. Their construction was sadly preempted by the writer’s death, yet the painter continued his pursuit, conjuring a world of cities impervious to history.

Now I shall tell of Rudolfia, a city formed of stone and memory, whose great cathedral was mined from a mountain beneath the ocean. The traveler who enters Rudolfia must pass through an invisible gateway between the church and its archive, incomplete after more than a century of construction. Upon crossing this threshold, my companions and I found ourselves unknowingly indoctrinated into the beliefs of Rudolfia and welcomed within the sacred edifice where drunken priests led us through labyrinthian chambers designed to retain their voluntary prisoners. After wandering for hours through the sanctum sanctorum, we entered into a ballroom wrought from the most brutal of materials, yet emitting a comforting glow of deep amber and the unmistakable din of scholars in revelry. Surely this was a feast day celebration.

The walls of the cathedral were not adorned with tapestries or colored glass, but with glowing windows looking out toward hidden cities and kingdoms unimagined. They were unlike any places our well-traveled party had ever seen, yet vaguely reminiscent of a builder from the land of Marco Polo. Like Rudolfia itself, the world behind the glass was made of ruins that have somehow slipped the shackles of time; ruins that remain untouched by the ravages of nature and unaffected by the fragility of memory. We saw Building Mountains shape the sky and Ozymandias waiting to be remembered while long-dead painters searched for Biblical cities sculpted from desert sands. Though each view revealed a different city, they shared one mysterious feature: the presence of a single traveler, flying through the air on a strange wooden glider. He was a kindred spirit, of this I was sure, a fellow explorer in service to his own king.

It was said that these windows, these portals through space and time, presented cities imagined by a brilliant architect whose designs evoke both flood and flight, whose life’s work spans centuries that pass in decades. His is a world where thought manifests as pure form and color, destined to remain unconstructed in ours, though no less real. Surely such a place should exist only within the pages of an illuminated manuscript, yet by some mystical transmogrification, they are brought into existence by the presence of the revelers themselves. For in Rudolfia there is a magic, or perhaps a science, that causes memory to be made corporeal. A careless word can conjure ghosts or manifest castles in the air. Such risks are necessary, it was revealed to us in secret, for the great stone cathedral of Rudolfia is built on glass foundations and the clinking of glassware joined with the repetition of incantations reifies the city’s architecture.

As my companions and I departed from Rudolfia, our spirits high and minds cloudy, I happened to glance back for a final look at the massive, brutal cathedral. To my surprise, as the night grew long and the sounds of revelry grew fainter, the cathedral itself began to dematerialize. Where it once stood, a raven glider built from the remnants of a bridge or ship soared into the night sky, its faceless traveler freed from the mind and the page of the architect. A silent, nocturnal herald of The End of The City.