Speaking of Groundhog Day I’ve been thinking a lot about repetition lately and what better time to share some of these thoughts than on the day Punxsutawney Phil has doomed America to six more weeks of Winter? A larger essay on the topic is in the works, so some or all of what follows may, appropriately, repeat in a later piece. Or this post might just evolve from a nascent collection of thoughts into something more fully-formed. Anyway, back to Groundhog Day. The movie has proven so popular that it has transformed the nature of Groundhog Day from a simple human interest story about a weather-predicting rodent into a television trope describing temporal recursion; this is usually done for comedic effect. Setting aside my irrational fear of personal stagnation, what makes Groundhog Day so compelling is its expression of the comedy of repetition, which lies in the expectation that something is going to happen and the inevitable resolution: a setup and a punchline.

But what happens when that punchline doesn’t come? The notion of Repetition ad absurdum is explored in a hilarious segment in the Radiolab episode “Loops” that examines a performance by comedians Kristen Schaal and Kurt Braunohler.

So if repetition is a setup and humor comes with its disruption, then the case of “Kristen Schall is a horse” is something of a paradox. The repetition remains uninterrupted. It concludes with relatively little ceremony and no real punchline, yet the humor comes from the very lack of the expected disruption. So perhaps then there is comedic value inherent in repetition qua repetition.

But in the architectural world, repetition is anything but funny. It’s most commonly found in Classical Architecture (have you ever seen a Classicist laugh about architecture?), where it expresses man’s intellect, logic, and dominance over nature; and Modernism, where it’s typically understood as a symbol of equality and egalitarianism or efficiency in production. Modernism taught us to expect each component to be identical, the train to leave at the same time every day, and each product off the assembly line to be indistinguishable from the last. So in this world where Modernism and repetition have become inextricably associated with one another, how can the humor of repetition be communicated in built form? This is my question.

Right now I’m thinking that the answer will be found in Postmodernism. It is, after all, often seen as the tonic for the spartan rigor of Modernism. And, I reluctantly admit, it’s often considered a joke. But can’t that joke be a good thing? Can’t humor be used more productively? In Log 22 architect and educator John McMorrough describes difference –the expectation of which, realized or not, creates the humor of repetition– as being precipitated by changes in either space (i.e. context) or time (i.e. history). So Postmodernism is uniquely suited to tackle this issue because what does it do best if not context and history? But now I’m reminded here of another quote about context, history, and repetition ad absurdum; this one from Sam Jacob’s article in the the Radical Postmodernism issue of AD (I seem to be quoting that issue a lot lately, but I think it’s an important text):

Jacobs goes on to identify Postmodernism as the farce to Modernism’s tragedy, but argues that with digital technologies, space and time have contracted and history no longer repeats so much as it happens all at once, splintering into “kaleidoscopic genre-Moderns”. The same things happen. Everywhen. Modified simultaneity is the new repetition. Perhaps what contemporary Postmodernism (I still can’t bring myself to say “Radical Postmodernism”) does best is context and history and tragi-farce-romcom-porno-etc. But I’m veering into some unstable ground here in trying searching for a revised understanding of Postmodernism, so let’s bring it back to something built, rather than conceptual repetition. 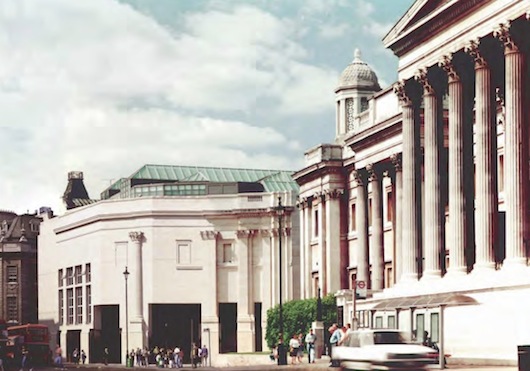 The first real example that comes to my mind, and I hope to elaborate on this later, is the Sainsbury Wing of the National Gallery, designed by Venturi Scott Brown and Associates. The syncopated rhythm of the pilasters on the front facade acknowledges, while undermining, the sequence of Classical columns from the original building. It’s just funny. Venturian wit at its best. Or is the humor of architectural repetition found in the commercial franchise, whose interiors are identical in Berlin and in Burbank? Or the unexpected “copy” – such as the black Villa Savoye found in ARM’s Institute of Aboriginal and Torres Strait Islander Studies in Canberra. But is this truly repetition? More importantly, is it funny? I don’t know what the answers are yet. If anyone has any thoughts on the matter, I’d love to hear them in the comments or on twitter. 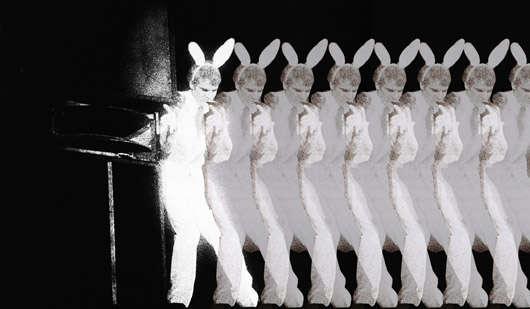 In lieu of any proper conclusion to these errant ponderings, I’ll leave the final word to Steve Martin, who in his 1978 album A Wild and Crazy Guy, opens his act by reflecting on the end of his multi-night run of performances in San Francisco:

This will be a new thing.