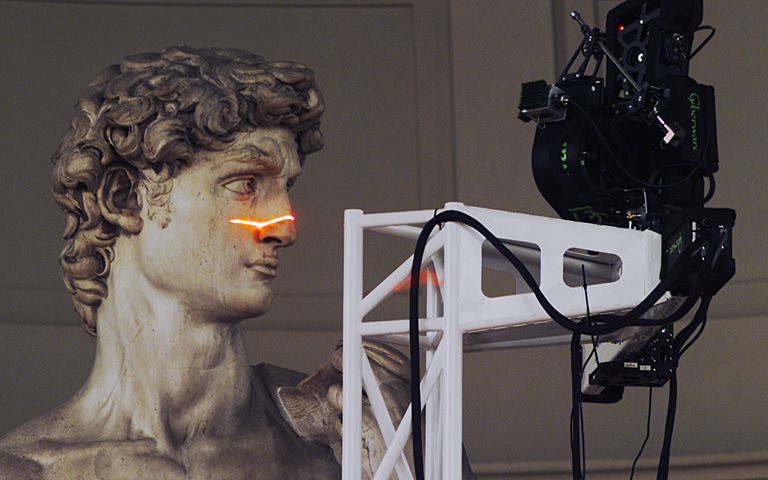 [Michelangelo’s David being scanned by The Digital Michelangelo Project]

Last week a crotch-shot appeared in my twitter stream. Now, this isn’t normally the type of thing I’d write about but this particular crotch belonged to Michelangelo’s David, the sculpture that wikipedia tells us, has “become iconic shorthand for ‘culture’” ( and if wikipedia’s validation isn’t enough, David was also the central focus of a Simpson’s episode, thereby cementing its place in our [pop]cultural canon). However, the tweeted crotch didn’t belong to that David, but rather a golden, double-sized duplicate resting horizontally on a lowboy trailer driving through New York City.

The enormous reproduction –officially known as David (inspired by Michelangelo)— was created in 2005 by conceptual artist Serkan Ozkaya and, more recently, served as the figurehead of a one-day event at the Storefront for Art and Architecture in New York. Though it was only in the city for a single day as a stopover en route to the 21c Museumum in Louisville, Kentucky, it seemed like David’s golden loins were in every new browser window I opened. The ubiquity of this project in all my social media streams got me thinking about my own experience with the original sculpture.

Live streaming of DOUBLE is available at http://www.ustream.tv/channel/double-david. 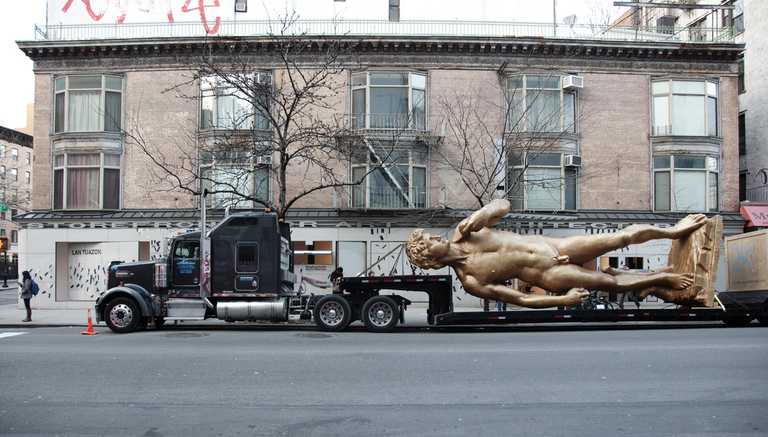 [David (Inspired by Michelangelo) at Storefront for Art and Architecture]

Outside the Galleria dell’Academia in Florence, home of Michelangelo’s David, I was standing in a cue that stretched along a stone wall covered with graffiti. It gave me something to read while I waited in line: “Robinson was here” and “Jack loves Diane” and “David is gay” and dozens of other scrawled declarations of identity. Nearby, buskers busked and hawkers hawked novelty boxer shorts strategically printed with images of David’s sling and stones. Thousands of partial reproductions, distributed across the world straight from the source.

Follow David (Inspired by Michelangelo) by Serkan Özkaya on twitter (@storefrontnyc #doubledavid) on March 6th starting at 11am as it tours New York City.

20 minutes and 10 Euros later, I was inside the Academia and the world fell silent. There he was. The slayer of Goliath standing at the center of the Tribuna, an extension to the gallery designed specifically to house Michelangelo’s masterpiece. During the nine years it took to build the that space, the David made a treacherous journey of his own. Covered in scaffolding for nearly a decade, he was slowly moved along a rail system created just to transport him from the Piazza della Signoria, through the streets of Florence, to the Academia. The original mobilized masterpiece. It was worth the effort. The scale and proportion of the Tribuna are the perfect complement to the sculpture. The light in the room accents every muscle and vein as it struggles against the marble. Even though there are hundreds of reproductions in museums, galleries, hotels and casinos around the world, seeing the authentic David is a visceral experience. I couldn’t suppress the stomach flutters and the dizziness that overcome me every time I see a true masterpiece. It’s humbling. Staring up at him, trying to come to terms with these feelings, I heard a man whisper to his young daughter, “no matter what happens, this is now part of your life.” That was it exactly. This experience, this work of art, was now part of my life. But more than that, it was part of me. It’s a strange thing. Why it should feel –and “feel” really is the best word; you can actually feel the original David– any different than standing in front of an exact replica is a mystery. Perhaps it’s the space. Perhaps context is everything. Perhaps it’s the knowledge that what I’m seeing was sculpted by the hands of a Renaissance master more than 500 years ago. Or perhaps it’s all in my head. But for whatever reason, the aura of the sculpture is undeniable. 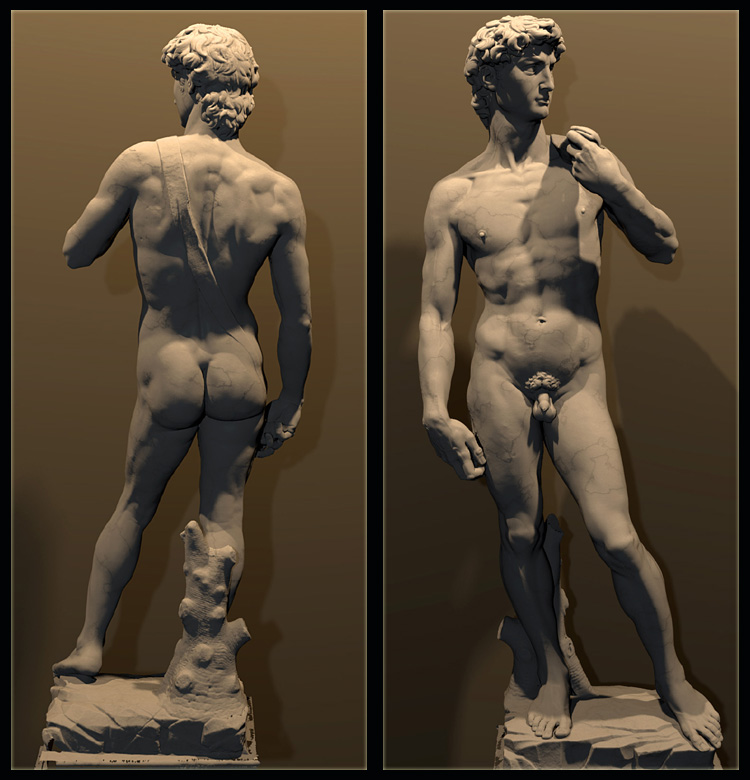 [image of the Digital David via The Digital Michelangelo Project]

For many visitors to the Academia that day, more attractive than the celebrated work of art was the small console standing just yards away. It looked like a pub golf game but was, in fact, David 2.0. Created by Stanford labs, the digital David is a “perfect” 3D model that art-users can rotate and manipulate to examine the sculpture in much closer detail than the would be possible with the original. From six tons to thirty-two gigabytes, the digitized replica of a masterpiece can now be reconstituted in the studio of anyone with a high-speed internet connection and enough hard drive space. Fine art on demand. And since the digital Davids are perfect replicas of David as he existed during the original scan, all physical traces of history present on the surface of the original will be present in future reproductions. Can a reproduction at this level of detail include the aura of the work along with the nicks, scratches, and imperfections? I doubt it. But the flexibility afforded by the digital model creates the possibility for entirely new experiences. Like seeing a 30-foot-tall David in a Manhattan traffic jam. A reproduction that is further reproduced as we retweet camera phone photos of a that David-double lying on a lowboy truck as it’s transported through New York City. Digital, mobilized reproductions of a mobilized digital reproduction. Perhaps now more than ever, David is, in fact, our iconic shorthand for ‘culture’.