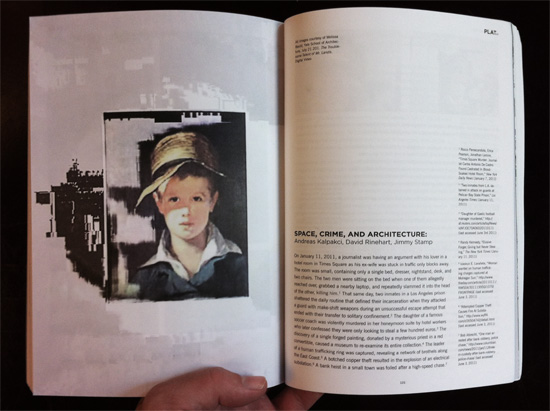 The most recent issue of Plat, an independent architectural journal published by students at Rice School of Architecture, features an essay I wrote with two of my fellow M.E.D. classmates. “Space, Crime, and Architecture” elaborates on some of the issues we discussed in our 2011 Yale School of Architecture research colloquium of the same name. It’s also a deeper, more academic exploration of my own personal interests in the relationship between architecture and crime – particularly the notion of crime as a critical tool or transgressive criticism. Plat 2.0: If You See Something Say Something investigates the gap “between architectural representation and the buildings it produces.” Here’s a brief excerpt from “Space, Crime, and Architecture,” slightly edited and sans footnotes:

Space, Crime & Architecture is an ongoing investigation of the failure of architecture when confronted with a criminal act. This failure is not that of an unrealized utopic ambition, but rather that of an apparatus unable to account for potential failure with the same precision it represents presumed success. The intent of this project is to theorize the conceptual dissonance between the criminal violation of a space and the intended use of a space as programmed by the architect.

The primary representation of crime typically comes from newspapers and other news media outlets. Such representations are necessarily rudimentary, and oftentimes manipulative. While the newspaper is, by its nature, obliged to convey information, it is also beholden to its readership: as a popular media outlet, it is equally obliged to be “popular.” As a shared source of information, the news media plays a central role in the construction of a culture’s perception of reality. As crime reports became nearly ubiquitous in the newspapers of the modern metropolis, fictional narratives depicting crime not only became a popular phenomenon, they contributed to the formation of both a taxonomy and a geography of criminal space. Following from Walter Benjamin’s writings on the flâneur, the crowd, and the metropolis, one can attribute the popularity of the detective story in the nineteenth century to the era’s social concerns and the anxiety of the bourgeoisie who, through newspaper stories and detective fiction, could experience the dangers of the city from the ostensible safety and comfort of their elaborately decorated interiors. In fact, it was the traces left by the criminal violation of the bourgeois interior that first made it necessary to invoke the detective in such novels. While crime fiction and true-crime narratives continued as a popular form of entertainment through the twentieth century, they have once again come to dominate the cultural zeitgeist. Television series like CSI, with its myriad spinoffs and imitators, present elaborate crime scenes and extravagant, high-tech investigations. Perhaps the current popularity of the genre can be explained by a new anxiety underlying life in the late twentieth and early twenty-first centuries.

In recounting criminal acts, the media not only constructs a cognitive map of places associated with crime, it exploits the collective consciousness to sensationalize the transgression of convention. The fictionalization of crime trains the public to identify crime as a moment of disruption, a discontinuity in the social order. Crime is both confronted by and pursued from its physical traces. And yet, despite these remains – which can be measured, documented, and reconstructed – the relationship between crime and norm is not strictly empirical. If crime and norm are two distinct notions, it follows that any value judgment of material evidence will rely on our understanding of the relationship between crime and norm. This prompts a surprisingly simple question: how can crime change the way we think of architecture? In this regard, there are two distinct, if not opposing, hypotheses from which our investigation begins.

1. The criminal act introduces a completely foreign element into an otherwise stable program; it employs logics or tools that differ substantially from the norm.

2. Crime is an organic function within the norm; it is a latent quality manifested by a catalyst (the criminal) that deploys logics or tools compatible with the norm.

The distinction is important because the relationship between crime and norm influences not only its social meaning, it also raises the architectural issue of programmatic/technical/spatial determinism. Writing about the culmination of this determinism as an assumption of architecture in modernity, Theo Van Doesburg anticipated the current trend of algorithmic design in 1924 when he described the potential for architecture to become merely the sum of a precise mathematics:

In architecture’s next phase of development the ground-plan must disappear completely. The two-dimensional spatial composition “fixed” in a ground-plan will be replaced by an exact “constructional calculation” – a calculation by means of which the supporting capacity is restricted to the simplest but strongest supporting points. For this purpose Euclidean mathematics will be of no further use – but with the aid of calculation that is non-Euclidean and takes into account the four dimensions everything will be very easy.

This investigation questions the social relations assumed by the production of architecture, and consequently whether architects are victims of the criminal act or accomplices to the crime. Is crime a complete deviation from the ideal “constructional calculation,” understood as both a programmatic strategy and as an architectural form, or an inherent variable in this calculation?

In the first of the above hypotheses, crime is understood as external to the established norm. As an unanticipated transgression of boundaries – legal, spatial, social – crime reveals the weakness of the implicit formal and programmatic optimism in any “plan” by subverting the conventional readings of the designed environment. When such conditions are made manifest, architecture becomes a crime scene.