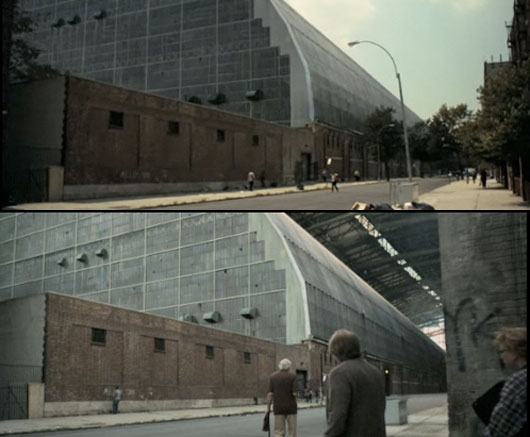 The trailer for the new Charlie Kaufman written-and-directed movie, Synecdoche, New York was released today and it’s every bit as weird and wondrous as you’d want it to be. A synecdoche, for those non-English majors out there, is a figure of speech in which a part of something is made to represent the whole; e.g. “all hands on deck.” The film follows the life of a failed, yet incredibly ambitious director (played Phillip Seymour Hoffman) as he attempts to stage a play inside a full-scale replica of a portion of New York City…built inside a warehouse. We learn during the preview that this process takes no less than 17 years. We also learn, as evident in the above image, that at some point during the production, another warehouse is built to encompass the already-cavernous warehouse that was originally adopted as a set — or does he build a replica of the original warehouse in itself? Intrigued yet?

When this film was announced last year, I wondered what would happen if we discovered that the portion of New York being reproduced includes the very warehouse within which the model is being constructed? Is it possible that the play will include an actor hired to play the director, who then hires an actor to play himself? Will this create some sort of infinite spacial vortex, like two face-to-face mirrors, the land-o-lakes butter label, or some sort of spatial Tristram Shandy? Judging from what we’ve seen so far, it looks like that’s exactly what happens.

This scenario is reminiscent of Paul Auster’s amazing book, The Music of Chance

It’s the story of two incredibly eccentric billionaires, Feather and Stone (who are so rich that at times they feel immortal), who have decided to use their money to pursue some very peculiar passions. Feather collects what can only be described as byproducts of history. Almost irrelevant artifacts that I suppose he sees as a synecdoche of that particular historical event (see what i did there?). Feather, however is not the more compelling of the bizarre duo. This honor falls to William Stone, who is not a collector, but a builder. He modestly refers to his passion-project as “The City of the World” – an enormous scale-model of Stone’s ideal city. As he says “It’s the way I’d like the world to look.” It’s also a quasi-autobiographical asynchronic temporal utopia. Within the City of the World, Stone has included representations of himself at various important moments of life – his childhood, his wedding, the day he won the lottery, and most notably, the portion of his life he has spent working on The City of the World.

When asked what will be built in a large blank area on the massive table, Stone replies “I’m thinking about doing a separate model of this room. I’d have to be in it, or course, which means that I would also have to build another City of World. A smaller one, a second city to fit inside the room within the room.”

A model of the model. Of course, following Stone’s logic, there would have to be another model and another and another ad infinitum. The idea of this perpetual model — surely any architecture student’s vision of hell — does not disturb Stone in the least. He has been working on The City of the World for five years and he fully intends, in fact he embraces the fact that he will indeed be working on it until his death.

Which brings us back to the likely conclusion of Kauffman’s film. But I have to wonder…are the buildings in the model New York actually habitable or are they hollow stage sets? Is this a play with characters that reveal their lives in the theatre of public space or in the privacy of an Upper East Side apartment? And what role will the audience play? Perhaps they’ll follow the characters through the “city” like a mob of silent voyeurs. We’ll have to wait until October 24th to find out.

Also: We’re so careful about backing up our data, but what about our homes? Should we keep partial back-up copies of cities in nearby warehouses as a last resort in the event of a large-scale attack or natural disaster? Manhattan II? New Orleans La Deuxieme? Discuss.

previously:
Here’s what happens when you look for truth: Life Without Buildings Interviews Charlie Kaufman