There aren’t really many architects whom I admire, but last Thursday I attended a lecture given by a man whose work has profoundly affected my understanding of architecture – architect and theorist Lebbeus Woods. After a brief introduction in which he was described as “visionary,” Woods started the event – part of CCA‘s Graduate Studies Lecture Series – by telling the audience he despised that term. Not only because some archaic definitions of the word imply a foolish impracticality, but also because he believes that by labeling him a “visionary” the architectural profession has marginalized his work and the revolutionary ideas that drive them. Why would they want to do this? Maybe because he’s proposing nothing less than a completely new definition of what it means to be an architect.

Structured around a timeline of his work, it was apparent right from the start, that this was going to be a phenomenal lecture. Engulfed by the darkness of the small lecture hall, we were immediately thrust into the high contrast black-and-white piranesian world of his early work. These painstakingly elaborate explorations of fantastical, industrial-baroque cities paved the way for more real world investigations.

In his vision of a reactionary, Cold War era Berlin, inhabitants of both the eastern and western halves have constructed a new city – an underground city hidden below the U-Bahn. A place inhabited by poets and criminals, where reunification can truly begin. In a later, 1991 Project, the Berlin Free Zone, Woods showed us drawings of his “FreeSpaces,” functionally ambiguous structures built within existing buildings. Literally, a city within a city. It’s almost Shakespearan. The loosely defined, unconventionally configured spaces are void of any purpose or meaning. They force their inhabitants to completely reinvent their mode of living – there’s no place to put that damn Eames lounge! Although its taken a completely unexpected form, this is quite the modernist idea. Until this lecture, I never thought of Woods as a modernist, but he most definitely is; and quite proudly wears the title! He believes that architecture truly has the power to change our lives and transform our way of living…but for some reason, many of today’s architects have forgotten that. Woods is a firm believer that if we only design what people already have or what they want, nothing new will ever emerges. “Architecture should be judged not only by the problems it solves, but by the problems it creates.”


In proposals for disaster stricken cities – Zagreb, Sarajevo, Havana, New York – Woods’s work adopts a medical metaphor. Radical forms of salvaged material act as “scabs,” over the “wounds” of a building damaged by war and disaster. As time passes and the buildings are rebuilt, a “scar” remains – a visual reminder, an aesthetic embodiment of history. These crisis projects produced what I find to be some of Woods’s most compelling work.

Finally, Woods spoke about his rod-and-cable based constructions in Vienna and Paris. These projects both relate in some way to the ideas of energy transformations and the collapse of system organization. He conceived these ideas and designed their components, but their implementation was left up entirely up to local artists and installers. By setting up a system of rules and guidelines, but not explicitly dictating the construction of the piece, Wood’s is recruiting co-conspirators in his plot to undermine the traditional understanding of architecture. The architect doesn’t dictate every aspect of the design. There’s something left up to chance and interpretation. Lebbeus Woods believes that this is the future of architecture. 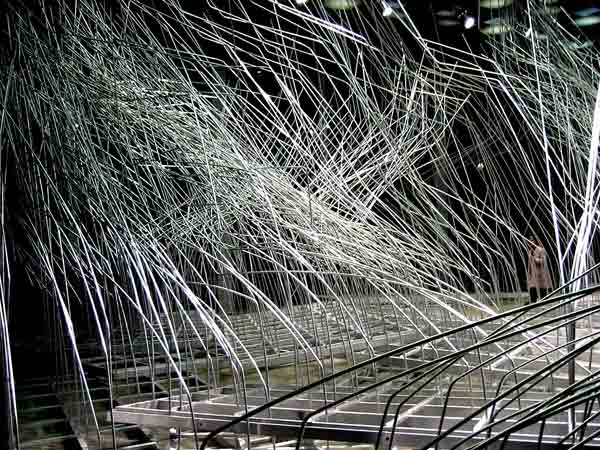 I was hoping that with his experience in crisis-design, Woods was going to speak about New Orleans. Unfortunately, he would reveal only the fact that he is indeed working on something. When I spoke with him afterwards, he told me that he is developing projects at multiple scales , and surprisingly, that he has never visited New Orleans. With its rich history, its diverse cultures, and its preposterous location, it seems like the perfect laboratory for his ideas. I can’t wait to see the innovative proposals this “visionary” (sorry!) architect creates.

Rarely have I ever been so enthralled for the entire length of a lecture. The avuncular Woods speaks in a manner that compels you you truly listen to what he’s saying. And of course, his astounding illustrations only serve to enhance what are already incredibly powerful ideas. He makes you believe in the worlds he’s creating. He makes you believe that architecture has the power to transform our physical and spiritual worlds. Lebbeus Woods makes you believe in Modernism.

i too love leb woods’s drawings and have been similarly enraptured by his lectures. he somehow manages to infuse steven holl-esque poetic language with some good ole political commitment and critical distance, almost in the style of michael sorkin. in fact, the drawings themselves are, stylistically, very similar to early projects of sorkin – i wonder if there’s a connection, if there’s ever been a collaborative effort between the two?