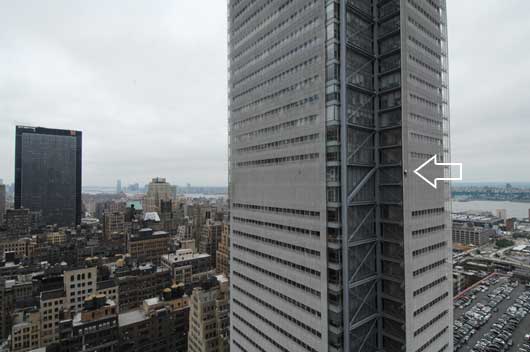 When I saw the photos last week of Alain Robert, “the French Spider-man,” scaling the side of Renzo Piano’s New York Times building, I was immediately struck by a single thought…well, 2 thoughts really. 1) That. Is. Amazing. 2) If superheroes were to exist, they would appear incredibly insignificant relative to the enormity of the cites they have so solemnly sworn to protect. I mean really, seriously insignificant. So often, our heroes are presented as larger-than-life characters; near-omniscient giants towering over buildings and streets. The reality however, is much more prosaic, as Monsieur Robert so kindly demonstrates. A single man is tiny. A hero, even of the “super” variety, is tiny. No matter how powerful, they will always be humbled by the buildings of a city. Take for example, the following two images: 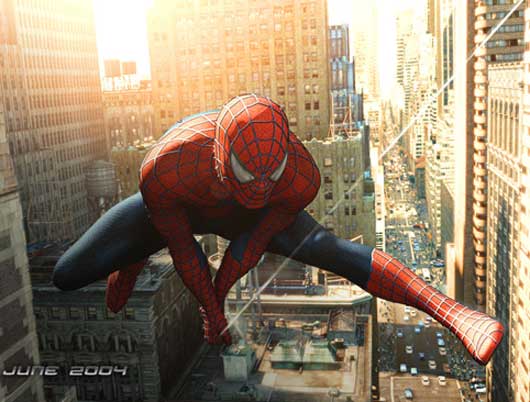 Whoa! Check out Spider-man swinging through New York City! He’s amazing and larger than life! (people really talk like that, right?) But without dramatic angles and serious photoshoppage, here’s the reality of a Spider-man in New York: 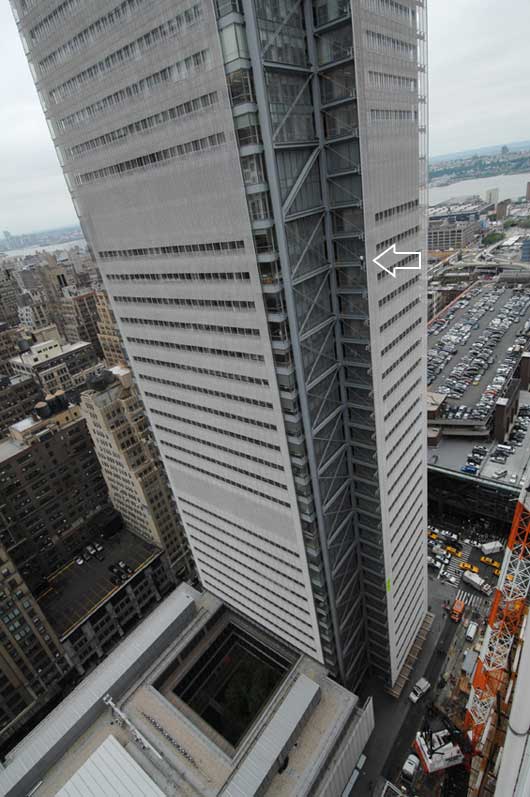 Ok, there are some prety dramatic angles in that photo, but you get the idea. I hesitate to draw this next comparison, due to the obviously negative connatations, but Leni Riefenstahl’s film Triumph of the Will pulls a similar trick in the name of fascist propaganda. By always framing Hitler from below, she gives him a towering presence in hope of creating the image of a mythic leader. Ultimately, she only inadvertently established the manner by which evil is often depicted in everything from serious cinema to cartoons. We understand both our heroes and our villains through abstracted personas built on carefully crafted imagery. But I digress.

We’re suppoed to be talking about architecture here, and in reality, a man able to climb buildings like a spider on a wall is ultimately just as significant; that is to say, almost not at all. In a world where buildings, not heroic deeds, are often understood as the pinnacle of human achievement, would a superhero even be recognized beyond pure novelty or celebrity? Don’t get me wrong, I have read and enjoyed comics my entire life — in fact, this week’s issue of Action Comics is on my night stand on top of Borges’ Labrynths. I don’t mean to disparage superheroes, I just want give a little perspective on the impossibly impressive wonder that is the modern metropolis. Without resorting to cliché, it’s safe to say that the staggering efforts that went into the Empire State Building or the Brooklyn Bridge are deeds of daring far more heroic than flying around the world fast enough to turn back time.

In the end, this whole thing really only serves two purposes. 1) It’s start of a new project for me in the form of a superhero comic where the hero is secondary to the city — a la the NYT Spiderman photo. 2) We’ve now opened up an entirely new realm of fanboy debate. Who would win in a fight: Spiderman or a Renzo Piano Building ? Could a Frank Gehry building defeat the webslinger? How would Batman fare against a SANAA museum?

&#183 The People Who Aspire to Great Heights, Literally, Hand Over Hand [NY Times]

see also:
Batman, Gotham City, and an Overzealous Architecture Historian With a Working Knowledge of Explosives
The Heroics of Scale
In Death by Design, Batman battles buildings and architecture critics

thank you for this article and the fantastic pictures

join the adventure at http://www.thesolutionissimple.org

Thank you French Spiderman for climbing buildings in the fight against global warming. This world could use more French Spidermen.

Top tier cities are not fit to the human scale.. They’re mega-organisms where people are just the cells that move the nutrients and waste in and out.

*That citycentric ‘comic’ has been done. It was called “sex in the city” and it sucked.

** Gehry will always win, because mere mortal planners are too weak to fight the notion that a silver symphony hall will save the town from economic despair.

I love the idea of a comic book about architecture, where the super-heroes are shown as tiny figures in the context of the skyscrapers.
You could always include some super-heroes who expand to giant size, such as “Giant-Man” and “Colossal Boy.”
Are you really going to do this or is it just a “thought experiment?”
You could have an architect as a super-hero. I wonder if that has been done.

there is an architect superhero… it’s john stewart, the black green lantern. apparently, he is only able to design green stuff (kinda like richard meier and his white buildings….). And Jimmy’s right, any Gehry building would be a terrific supervillain. But in the end, spider-man always wins, doesn’t he?

SA – Sex in the City is in no way —not even remotely close—to what I’m talking about. As for pyracantha’s question, I do hope to take this beyond “though experiement” into a real comic. Although i’ll be surprised if its finished any time soon.

Victor – John Stewart is awesome. When Green Lantern’s are drawn especially well, each one (there are thousands) is surrounded by a unique energy signature — like an aura. John Stewart’s is very architectural. crisp lines and orthagonal forms.