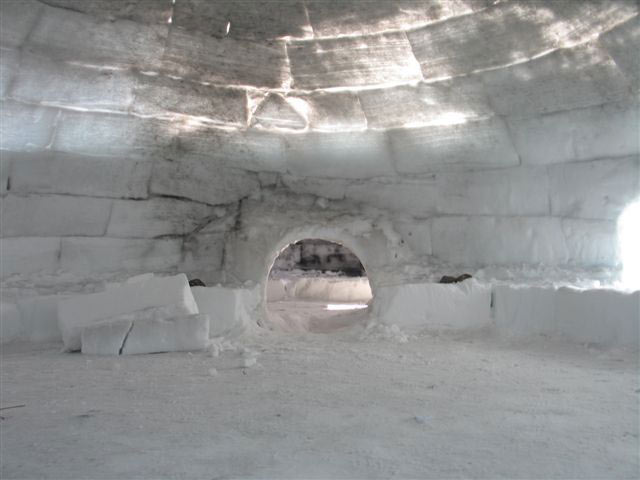 I was recently listening to some of relatively new lo-fi music (specifically Times New Viking and Ariel Pink) while mulling over some potential projects and series of blog posts that originated over at mockitecture. The subject: music-building pairings. To get up to speed on this expanding dialogue, also check out Fantastic Journal and Sit Down Man, You’re a Bloody Tragedy. Seriously, go ahead. I’ll wait….

So with all these ideas rattling around, I posed a question to the hive-mind of Twitter: What’s the architectural equivalent of lo-fi? However, unlike the aforementioned posts, the idea here is more general than single-serving building-song pairings. What makes lo-fi music, lo-fi? How does that innate lo-fi-ness translate into architecture? The responses were varied: 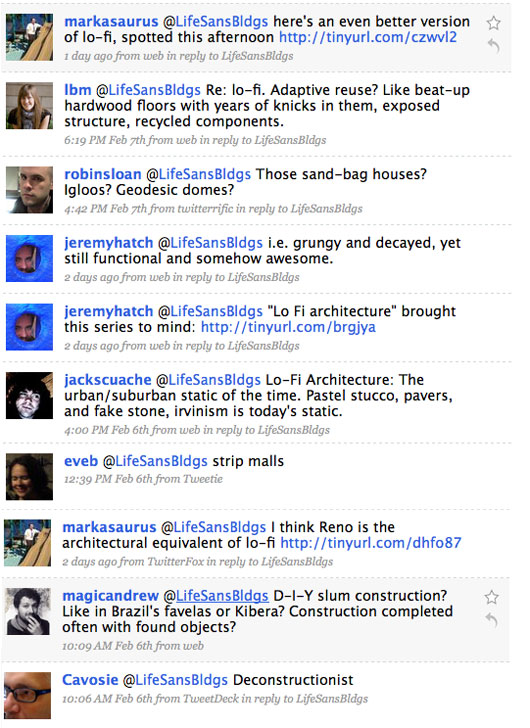 A lot of IRL answers seemed to agree with Andrew’s suggestion of slums/favelas as lo-fi architecture. I think that’s a good answer, with one caveat: lo-fi music is, more often than not these days, an intentional act leading to static, distortion and “roughness” as a desired result; an aesthetic decision. Maybe then, something closer to the photocollages of Dionisio Gonzalez would be appropriate? Or Teddy Cruz’s Manufactured Sites essentially an armature for a favela?

But I like the Igloo suggestion as well. Breaking it down, igloos seem to share a few traits with favelas: the act consciously making something that meets a basic set of requirements with the material(s) that are readily available. But, despite its appeal to minimalists everywhere, “igloo” isn’t an aesthetic. It’s a form derived out of necessity and practicality. So no answer completely satisfies me. Maybe I’m coming at this wrong though. And I definitely don’t know enough about igloos and favelas. So while I continue to think (a mix of Brutalism and Minimalism maybe? What if the Smithsons redesigned the Barcelona Pavilion?), I open the floor to commenters.

What is lo-fi architecture?

Oh, and as far as the above image goes, how about pairing it with My Bloody Valentine’s To Here Knows When:

8 replies on “Searching for a Definition of Lo-Fi Architecture”

What do you mean by Lo-fi , I know architcture in many respects allready build from methods way older than we realise, — they produced wonders in concrete molding even 1880, and more sofisticated than today, Eiffel the engineer who projected the EiffelTower, had factories that made fine assembly building compoments – today thry replace that with stupid standard steel profiles and standard fittings building concert Halls. So is it the clever building systems from before 1910 you value, or is it the stupid rigid lazyworks of today’s towers ?

Great question. If the definition of lo-fi architecture follows the definition of lo-fi music, I would say it has to do with production, further stating that there’s no such thing as lo-fi music, just lo-fi recordings. We are talking about lo-fidelity, after all, which makes me think of the difference between what is input and what is output. That happens with the recording medium, not the original music.

Following from this, then would lo-fi architecture be defined by its production? I’m not thinking of slums (no architectural production, in the traditional sense) or hand-drawn production vs. CAD production. I’m thinking of room for fuzziness in the builder’s interpretation arising from the way the plans are produced. Instead of details galore, maybe we have very few details to accompany the plans and renderings that describe the design. This gives liberty to the builder and occupant, rather than giving the architect all the decision-making power.

I guess this take lies somewhere between a shanty town and the Guggenheim Bilbao. I can’t think of much architecture that follows from this description, except for maybe Teddy Cruz’s projects and Doshi’s Aranya development in India, where occupants fill in the framework the architect develops. I guess my take is a democratic decision instead of an aesthetic decision. Nevertheless this looks to be aligned with that possibility you mentioned in your post. Go figure.

Hm. Although maybe I’ll sound like an idiot for saying this, I hadn’t thought of considering the medium and the MUSIC as separate entities. I was too caught-up in the idea of the artists intent on creating something that just sounded “lo-fi.” Hell, Beethoven could be lo-fi depending on the recording’s production quality.

So then – perhaps a form of architecture that uses whatever materials / equipment / workers / that are readily available. or even doing it yourself. I’m thinking now of the early LTL projects in New York: a chopstick-topography ceiling, a wall molded from coffee cups, etc. Often installed by the architects themselves. The end result is decidedly polished, but still a reflection of clever design in the face of severe constraints.

God, I have the perfect example, I just can’t remember the name. Came across him recently while doing some research.

Over engineering structures so that you don’t waste money trying to get it perfect. Thicker columns, less calculations, lower skilled workforce. Standardise construction to make it simpler, not more complex. Use materials wisely.

I don’t think favelas are a great example of lo-fi architecture. Lo-fi is a concious choice because you want to gain something from imperfection. That’s not to say there aren’t some skilled people making nice lo-fi buildings in favellas, but they’re the minority.

Also, another version of Lo-Fi would be Mike Reynolds – http://en.wikipedia.org/wiki/Mike_Reynolds_(architect)

Does anyone knows what should we expect in 2010? they promise more problems on wall stree? I are heading toward dipression?

Not that I’m impressed a lot, but this is a lot more than I expected for when I stumpled upon a link on Digg telling that the info here is quite decent. Thanks.