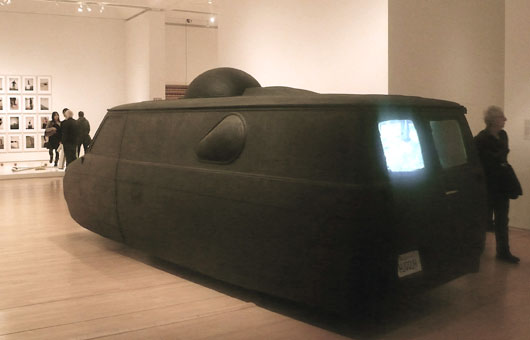 [The Ant Farm Media Van v.08 in situ at SFMOMA[

For the past few months, Life Without Buildings has been following the retrofitting of the Ant Farm Media Van v.08 (Time Capsule), on view as part of the San Francisco Museum of Modern Art exhibition The Art of Participation: 1950 to Now. Life Without Buildings recently sat down with original Ant Farm Members Chip Lord and Curtis Schreier and San Francisco based architect Bruce Tomb to discuss the Media Van, the Counterculture of the 70’s, modern social networking, and mobile utopias. The full article and interview is now available online as a preview of Floater Magazine Issue 2: System False. Continue reading for an excerpt from that article.


Missing since 1972, The ANT FARM Media Van was recently unearthed in Sausalito, California in the historic NIKE Missile Site SF-88. In response to rumors and inquiries, Golden Gate National Recreation Area Ranger John Porter, led original members of Ant Farm, the seminal 1970s art / architecture / performance collective, Chip Lord & Curtis Schreier, along with San Francisco architect Bruce Tomb, down into the bomb-proof vault doors of the nuclear capable base where they discovered the Media Van, a nomadic documentation node in their utopian “Truckstop Network,” covered in tar and an estimated 36 years worth of dust. Delighted by the strange and mysterious condition of arguably their most iconic work, the trio speculated that the van was intended as a Time Capsule, abeit an empty one, and claimed that it “embodies the legacy of Ant Farm.” They proudly dubbed it ANT FARM Media Van v.08 [Time Capsule], and retrofitted the interior with a technological update that enables it to record digital media.

Jimmy Stamp: So it’s 2008 and The Media Van has undergone yet another transformation.

Chip Lord: One thing we noticed is that when people enter the van at the museum, often their first question is, if they know about the history, “is this the real van? Is this the same van?”

Bruce Tomb: You know, it’s not so much questioning its…actuality, but it’s one of those leading questions. They’ve already answered it themselves. They think it is and they just want the affirmation back that it is.

Curtis Schreier: But you could say no — it’s a year later. It could just be a time question. We found it covered in tar in the NIKE site and reworked the interior.

You don’t know what happend to it? Why it was covered it tar?

BT: It disappeared. And the reason, well…we don’t know.

What was the original intent of the Media Van and its different iterations? I know that it was a node in a greater network — the Truck Stop Network. And there was this idea of informational currency and idea exchange…

CS: Well there’s a history even before that. We were doing alternate architecture and that kind of architecture had to be spread around and still had to communicate with itself. And the fact that we added to the architecture tools — video as an extension of photography — um, The Media Van happened at the right time. It’s a standard commercial issue that we were able to use to our own ends.

CL: But it was also within the context of a countercultural subset of people who were living in vehicles and living nomadically. Some of those were like wooden gingerbread houses on the back of pickup trucks and some were VW vans and what not. I think it was endemic of our age, being in the mid 20’s you want to go out on the road. 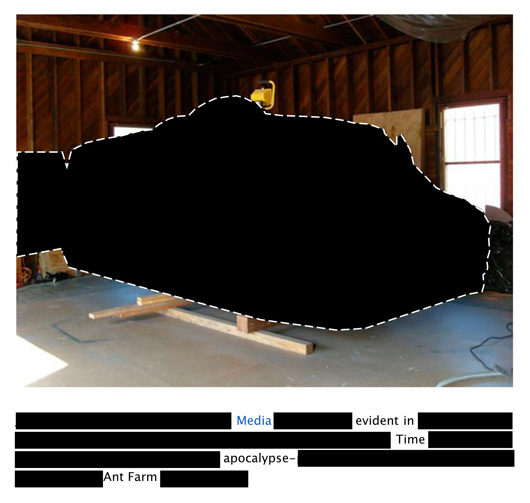 I can’t believe there are no comments!
This is an important find, and cutting edge reportage – LIFEWITHOUTBUILDINGS has made a major discovery of cultural significance.