Finally. I have internet. The past few days have been pretty strange. Normally, I get most of my news from the internet – reading papers online, blogs, journals, etc. – but recently my only information source was the television and its many 24 hour news stations. Until now, I had no idea there was so much of a difference between the two forms of media. For days, It was nearly impossilbe to find any solid informatiion regarding my return to new orleans, or any solid information about anything. Sure, if I needed to see shocking pictures of drastic flooding and helicopter rescues, i’d go to the television…but i’m over that. Your heart can only be broken so many times. Most of this is probably old news to anyone reading this, but it was quite the realization for me. It’s never been quite so clear just how far removed the televised media is.

Anyway. that’s not why you read this blog. That is, if there’s anyone left who still reads this blog. On my recent cross-country jaunt I found myself in phoenix and made a stop at Frank Lloyd Wright’s Snowbird Hide-a-way, Taliesin West. (Taliesin West, by the way, is also the name of my prototype band franchise.) More and more, I’m finding that I love Frank Lloyd Wright. He deserves all the praise and acclaim he’s recieved.

A Welsh word, “Taliesin” means “shining brow,” so named because it sits on the brown of a hill overlooking a valley below. It was Frank Lloyd Wright’s winter home, school, and studio. Started in 1937 by his apprentices, whose construction skills are evidetn throughout the complex, it is constructed almost entirely of materials found on or near the site. Taliesin West is very um..loosely assembled, to put it nicely. I loved seeing the crooked and splintering beams and loose mortars. FLW wanted it to be a place of the earth and a place where his apprentices could learn by doing. The building stands as a testament to his wish, and any flaws only make it more beautiful. 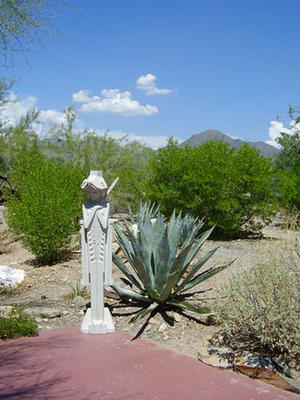 Statue marking the entrance to the compound. It looks like something FLW could have designed, but I’m not sure and the tour guide was also clueless. There was a lot of art at Taliesin but this was the only statue that I really liked. The other objects were mostly cheap ceramic sculptures bought in Japanese markets. 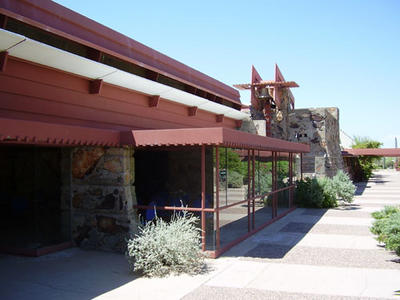 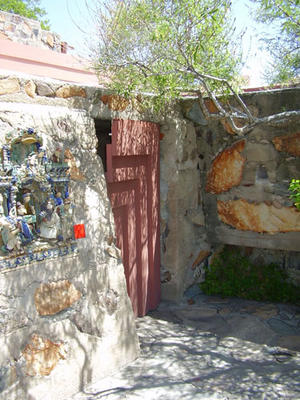 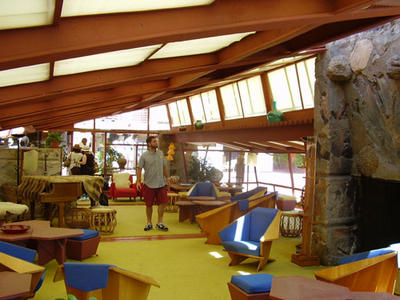 The living room area. I loved the scale of this room. Thoughtfully proportioned and comfortable without being overbearing. Most of the rooms originally used only canvas panels for ceiling enclosure. Unfortunately, the canvas doesn’t hold up in the harsh dessert environment and has to be replaced often. I forget the numbers listed by the tour guide, but Taliesin West is incredibly expensive to preserve and maintain. 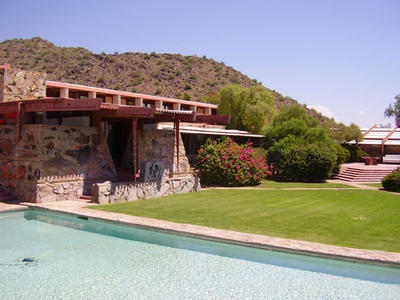 One last shot. All the water features on the site are fed by a series of wells designed by Wright. The bottled water sold in the gift shop, however, was not drawn from these wells. Stay tuned for more from the trip.

4 replies on “Tales from Taliesin”

Good luck with your travels; please continue to post entries & photos. I enjoy your opinions.

I’m an apprentice at Taliesin. I am saddened to see that you just missed the arrival of the school by a few weeks.

We begin to arrive from the Wisconsin campus on October 9th. Taliesin West is our wintet campus from Oct till May. As a long time reader of your blog, it would have been great to show you the behind the seens! ;)

Did you happen to notice that the casework in the gift shop is wood grain laminated plastic? Not “In the nature of materials”

The statue that you snapped a picture of is a replica of sprites that Wright did for Midway Gardens in Chicago. So, yeah – he did design it.

There is also a similar sprite by Wright (another replica) over at the Arizona Biltmore.