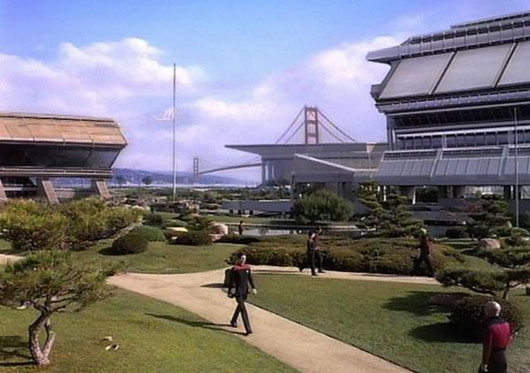 While thinking about the two very different issues of starship architecture and San Francisco’s Presidio last month, blogger Telstar Logistics reminded me of our “duty to preserve the Presidio so future generations may use it as the site for Star Fleet Academy.” How could I have neglected to mention this earlier! Two such germane topics (relative to this site, anyway) seamlessly merging in laser-welded glory. This then got me to thinking about San Francisco in general and the criticial role it tends to play in science fiction. For those who have no idea what I’m taking about, A little history may be in order.

In the world of Star Trek, San Francisco is a much more important place that it is in our sad little reality. Sure there were minor differences, like the Eugenics Wars of the 1990s (which, if they were anything like the Cola Wars, I shudder to imagine) and the massive homeless problem of 2020 with its “Sanctuary District” concentration camps, but I think it was the most pivotal event in human history, first contact with extraterrestrial life, that had the largest impact on San Francisco. With deference to it’s history as the location where 50 of the earth’s nation gathered to sign the UN Charter (a fact celebrated by a piss-smelling MUNI station in a bad neighborhood), San Francisco was chosen as the location to sign the first Interplanetary Charter, and eventually became the headquarters for both Starfleet and Starfleet Academy. Specifically, both institutions are located in The Presidio — the currently hotly contested battle ground for a new Contemporary Art Museum. Excuse the extended digression, but here’s an image of Trek’s alternate Presidio:

It seems that at some point in this alternate history, San Francisco’s preservationists eventually conceded defeat. An “air tram station” boldly looks out over the Golden Gate Bridge and SF Bay. A softer mix of Brutalism and basic curvy sci-fi movie architecture. Ideal? No. But definitely an improvement over the current faux-historic designs mandated by overly-vocal and underly-visionary individuals, committees and trusts. And then there’s Starfleet Headquarters – vaguely Niemeyer-esque modernism in a japanese tea garden. While I don’t think I’d like to see this building dominating the park, I do hope we don’t have to wait until the 22nd century for something to get built that’s truly of its time. 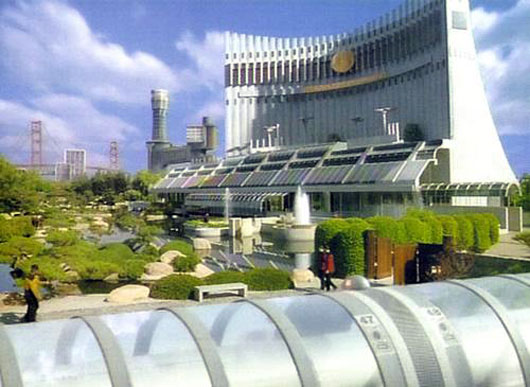 Outside of the Star Trek Universe, San Francisco also recently became the new home of the mythical city of Atlantis in the television series Stargate: Atlantis. And in the slightly distopian future of William Gibson’s All Tomorrow’s Parties, we see a San Francisco that’s been drastically altered due to another huge Earthquake. In that novel, the Bay Bridge, connecting SF and Oakland, has essentially become its own multi-tiered city.

But we don’t need to look towards Science Fiction to see the potential of an alternate San Francisco. There was time— lets call it the 90’s—when it looked like San Francisco might become ground zero for all important new technologies. The Presidio was briefly envisioned as a “global center for innovative ideas and technologies to make human societies sustainable.” The Presidio was to be a beacon for human progress and achievement — not entrirely unlike, Starfleet Headquarters. Unfortunately, funding was never found but the park itself was saved from developers, albeit on the the terms that it becomes self-sustaining. A bit ironic, no? And now as people become more aware of the importance of sustainability and the projects and ideas emerge from all corners of the Earth, wouldn’t it be beneficial—maybe even inspiring—to build a single point where all these ideas merge in a giant think-thank of sustainability; where scientists, theorists, and architects meet to share and test their ideas? The Presidio could still some day become a live testing ground for world-changing strategies and design. Instead, we get ugly contemporary art museums. 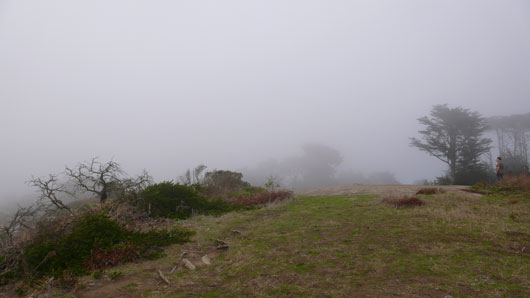 [A foggy trek through the Presidio]

Also in the 90’s, it seem possible to think that San Francisco was poised to become America’s new Media Capital: the hub of television, radio, and every other live-streaming, interactive information portal dreamt of by pundits of the time. This might be a bit optimistic, but in reading Valleywag’s CNET obituary, it’s not difficult to imagine a takeover by new media.

“CNET went public in 1996, and its market cap peaked at $12 billion before the dotcom bubble burst. At one point, it flirted with NBC, going into a joint-venture deal to create NBCi, a now-forgotten Web portal. At the time, some pundits imagined CNET and NBC combining — with CNET on top.”

If SF became media hub of the US, what kind of impact would that have had? Would major companies relocate? Would the relatively uncrowded city residents know and love suddenly become a hyper-dense media metropolis? Would it have revived interest in a global environmental research facility?