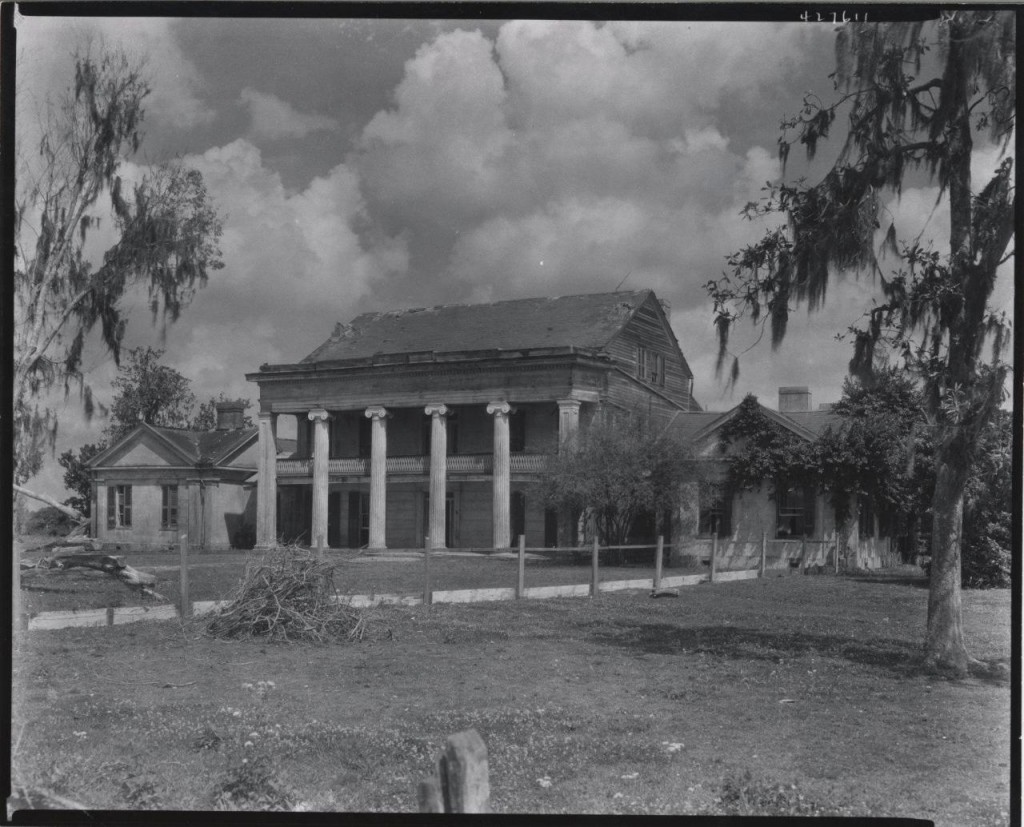 [Robert W. Tebbs, photographic survey of a Louisiana Plantation (1926); via]

I’m currently reading William Faulkner’s Absalom, Absalom! It’s a incredible book. A visceral portrait of a haunted, Civil War era American South. I haven’t finished it yet, so this post is pretty much spoiler-free, but I was so impressed with the depictions of the mansion around which most of the story’s central tragedies unfold that I couldn’t wait to post its description. Known as Sutpen’s Hundred, the 100 acre plantation is imbued with a personality and life that reflects the disposition of its builders and the futility of struggling against the destiny it inflicts upon its unfortunate occupants.

…and so into the house (somehow smaller than its actual size –it was of two storeys– unpainted and a little shabby, yet with an air, a quality of grim endurance as though it had been created to fit into and complement a world in all ways a little smaller than the one in which it found itself) where in the gloom of the shuttered hallway those air was even hotter than outside, as if there were prisoned in it like in a tomb all the suspiration of slow heat-laden time which had recurred during the forty-three years… [p06]

He lived out there, eight miles from any neighbor, in masculine solitude in what might be called the half acre gunroom of a baronial splendor. He lived in the spartan shell of the largest edifice in the county, not excepting the courthouse itself…without any feminized softness of window pane or door or mattress.

[Sutpen’s] presence alone compelled that house to accept and retain human life; as though houses actually possess a sentience, a personality and character acquired not from the people who breathe or have breathed in them so much as rather inherent in the wood and brick or begotten upon the wood and brick by the man or men who connived and built them – in this one an incontrovertible affirmation for emptiness, desertion; an insurmountable resistance to occupancy save when sanctioned and protected by the ruthless and the strong. [p67]

As this house is given human characteristics, Quentin Compson, the reluctant historian burdened with this tale of woe, is himself transformed into a historic setting:

His very body was an empty hall echoing with sonorous defeated names; he was not a being, entity, he was a commonwealth.

And of course, the story of a house is incomplete without the story of its architect. Excluding a few period details, Faulkner’s description of the French architect, whose passion and mirthless determination drives him to complete the work at the cost of his own personal wellbeing, could very well be that of a slightly eccentric contemporary architect:

…a small, alertly resigned man with a grim, harried Latin face, in a frock coat and a flowered waistcoat and a hat which would have created nor furore on a Paris boulevard, all of which he was to wear constantly for the next two years –the somberly theatric loathing and the repression of fatalistic and amazed determination– while his white client and the negro crew which he was to advise though not direct went stark naked save for a coating of dried mud. This was the French architect. [p26]

…the architect in his formal coat and his Paris hat and his expression of grim and embittered amazement lurked about the environs of the scene with his air something between a casual and bitterly disinterested spectator and a condemned and conscientious ghost…[amazed] at himself, at the inexplicable and incredible fact of his own presence. But he was a good architect….And not only an architect…but an artist since only an artist could have burned those two years in order to build a house which he doubtless not only expected but firmly intended never to see again….only an artist could have borne Sutpen’s ruthlessness and hurry and still manage to curb the dream of grim and castle like magnificence at which Sutpen obviously aimed, since the place was Sutpen planned it would have been almost as large as Jefferson itself at the time; that the little grim harried foreigner had singlehanded given battle to and vanquished Sutpen’s fierce and overweening vanity or desire for magnificent or for vindication or whatever it was…. [p28]

Faulkner’s writing evokes a true sense of time and place. The well-constructed narrative communicates the tragedy and history of Sutpen’s Hundred. I don’t see any reason why such a method couldn’t be used in architectural criticism. Though of course, such an experiential recount of a building would be personal rather than universal. But that may not be a bad thing. After all, aren’t best songs and stories –those that resonate most with us– true accounts of personal experience? Don’t we project ourselves into that narrative? Perhaps a more narrative criticism would allow the public to connect with architecture in a more meaningful way. Beyond criticism though, I wonder how such evocations could actually inform the design process? Could architects more explicitly use narrative as a design tool to create places that more deeply resonate with us?